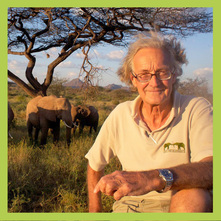 IAIN DOUGLAS-HAMILTON
As one of the world’s principal authorities on the African elephant, Douglas-Hamilton pioneered the first in-depth scientific study of elephant social behavior in Tanzania’s Lake Manyara National Park at age 23. In the 1970s he researched elephant population trends and alerted the world to the devastation poaching was having on the species, and was instrumental in bringing about the worldwide ban on the trade of ivory in 1989. Dr. Douglas-Hamilton acts as a member of the Technical Advisory Group to the CITES Convention on the Monitoring of the Illegal Killing of Elephants as well as serves on the data review task force of the African Elephant Specialist Group of IUCN. He has authored two award-winning books, Among the Elephants and Battle for the Elephants, with his wife Oria. In 1993, Douglas-Hamilton founded the Save the Elephants organization, which, “aims to secure a future for elephants, to sustain the beauty and ecological integrity of the places where they live; to promote man’s delight in their intelligence and the diversity of their world, and to develop a tolerant relationship between the two species.” Now based in Samburu National Reserve in Northern Kenya he continues his research with a dedicated team, monitoring the movements and behavior of over 900 elephants. In 2013 The Elephant Crisis Fund (a joint initiative between Save the Elephants and San Francisco based NGO Wildlife Conservation Network) was established to confront the threat to elephants by supporting the most urgent, important and catalytic projects across the crisis to stop the killing, stop the trafficking and end the demand for ivory. 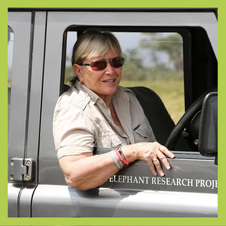 CYNTHIA MOSS
Born and educated in the U.S.A., Cynthia Moss moved to Africa in 1968 and has spent the past 47 years studying elephants and working for their conservation. She began her elephant work in Tanzania as an assistant to Iain Douglas-Hamilton. In 1972 she started the Amboseli Elephant Research Project (AERP) in Kenya. Moss has directed AERP for over four decades, making it the longest running elephant research project in the world. It is also one of the longest continuous studies of any mammal. Moss’s research has concentrated on demography, social organization and behavior of the Amboseli elephants; her collaborators use the Amboseli dataset to study genetics, communication, reproductive histories, and cognition. Moss’ role as Director of AERP encompasses directing and supervising ongoing research; disseminating scientific results; mentoring and training young biologists and conservationists: and promoting public awareness about elephants. In 2000 she founded the Amboseli Trust for Elephants (ATE) whose mission is to ensure the long-term conservation and welfare of Africa’s elephants in the context of human needs and pressures through scientific research, training, community outreach, public awareness and advocacy.

Moss is the author of four books: Portraits in the Wild, Elephant Memories, Echo of the Elephants and Little Big Ears and co-author (with Laurence pringle) of Elephant Woman. In 2011, Moss and her colleagues published a scientific volume on the AERP research results. Edited by Moss, Harvey Croze and Phyllis C. Lee, The Amboseli Elephants: A Long-term Perspective on a Long-lived Mammal covers the first three decades of research into the Amboseli elephants. She has written numerous popular and scientific articles and has made six award-winning TV documentaries about elephants, the best-known being the films following the famous matriarch Echo and her family. In 2002 she was awarded a MacArthur “genius” fellowship, a 5-year grant given for exceptional creativity and a demonstrated track record of significant achievement. 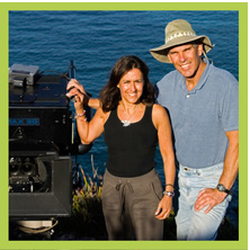 HOWARD & MICHELE HALL
Specializing in wildlife and marine conservation films for television and large format theaters, Howard and Michele have worked together for more than two decades. Their projects include three episodes of the PBS series Nature and a National Geographic Special. Howard’s career as an underwater wildlife film producer, cinematographer, still photographer and writer began in the early 1970's. From 1976 until 1988 Howard hired out his cinematography skills to other producers. Among his favorite projects were the 16 episodes of the Wild Kingdom series he filmed and directed; filming for Survival Anglia; ABC's Dolphins, Whales, and Us; and being the primary cameraman for the 1981 National Geographic Special: Sharks. In addition to winning a Peoples’ Choice award at the very first Jackson Hole Festival and a Golden Panda Award at Wildscreen, the Hall’s television work has resulted in seven Emmy awards.

Howard and Michele Hall are perhaps best known for their underwater IMAX films. In 1994 Howard directed the first underwater IMAX 3D feature, Into the Deep. In 2002 Howard was underwater sequence director and Michele was location manager for MacGillivray Freeman’s Coral Reef Adventure, a film in which both he and Michele are featured on-camera. Michele produced and Howard directed Island of the Sharks, Deep Sea 3D and Under the Sea 3D.  Their IMAX features had grossed more than $200 million in box office receipts and won awards from Jackson Hole, Wildsceen, Giant Screen Cinema Association and the International 3D Society. 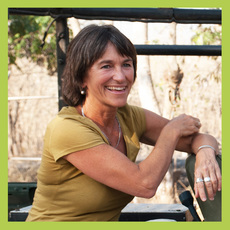 JOYCE POOLE
Joyce Poole has studied elephants and worked for their conservation and welfare for 40 years and is a world authority on their reproductive, communicative and cognitive behaviour. She graduated from Smith College, holds a Cambridge University PhD and was a Princeton University post-doctoral fellow. Poole’s scientific discoveries of African elephants include musth, infrasonic and long-distance acoustic communication, vocal imitation, vocal and gestural repertoires and she has collaborated in ground-breaking elephant cognition studies. Poole is a leading voice for the protection and well being of elephants. Her documentation of the damage wrought on elephant societies by poaching was instrumental to the 1989 ban on international trade in ivory. She has been an expert witness in numerous elephant cruelty cases, is lead author of The Elephant Charter and an outspoken critic of the capture of elephants for captivity.

Poole began her elephant research in Amboseli, Kenya in the mid-1970s. She headed the Kenya Wildlife Service Elephant Program 1990-1994, where her knowledge and enthusiasm inspired many Kenyans who hold key elephant management positions today. She has published numerous scientific and popular articles, written two books, Coming of Age with Elephants and Elephants, and participated in scores of media projects. She received a Smith College Medal for her research and training in Africa. In 2002 she and husband, Petter Granli, founded ElephantVoices and continue to co-direct it. They currently run elephant conservation projects in the Mara ecosystem, Kenya and in Gorongosa National Park, Mozambique, and work globally for the survival and welfare of elephants.