A FREE 7-week online masterclass with Candice Odgers beginning June 9, 2021
Jackson Wild is proud to present an Editing Masterclass - an opportunity for Jackson Wild Collective members to take their editing skills to the next level in crafting more impactful stories. Led by Candice Odgers, an award-winning editor with over 18 years of experience in the natural history industry, this 7-week online interactive masterclass will incorporate seminars, case studies and hands-on projects to refine technical skills and explore the nuances of storytelling. This Masterclass will benefit an editor who has a beginner to intermediate understanding of editing software. Participants will need to have reliable internet access to download and share footage/edits, as well as a computer with editing software. If you do not have editing software currently, you can download Davinci Resolve, a free editing platform.

The Editing Masterclass will take place on Zoom every Wednesday for 7 weeks, starting at 12pm EDT / 10am MDT / 6pm SAST and lasting for two hours. Participants will also be expected to commit 3-5 hours on their own to prepare for each week's session. The first session will be on June 9, and the last on July 21.
The Editing Masterclass will accept 10 Fellows for hands-on experience/critique, in addition to an extended group of view-only session participants.

​Free of charge, this Masterclass is made possible by the generous contributions of Candice Odgers, NatureFootage, Terra Mater Factual Studios, Dereck and Beverly Joubert and the Jackson Wild Collective.
Application deadline: May 28
Questions? Email christie@jacksonwild.org

The Editing Masterclass will take place on Zoom every Wednesday for 7 weeks, starting at 12pm EDT / 10am MDT / 6pm SAST and lasting for two hours.
Week 1: June 9
IN THE BEGINNING
The mechanics of a documentary = the binary code
Starting a project
Starting with an empty timeline
Avoid setting yourself up for trouble
Preparing your media properly
Viewing the media
Creating a Story and Arc Structure regardless of duration of project

Week 2: June 16
PRAC:
Trailers & Promos: Let’s get down to business.
Hands-on practical is always beneficial. Let's get into the difference between a trailer and a sizzle reel. All participants will be cutting their own version of each in this lesson.
Trailer: Sex Lies and Butterflies
Promo / Sizzle: Sharks of the Caribbean

Week 3: June 23
No seminar this week, this time will be used for participants to work on their individual projects.

Week 3: June 30
SHOOTING FOR THE EDIT/ STORY
A stitch in time saves nine.
Understanding what you need before you sit down and edit can save vital edit time but also allows critical creative time. Having a great relationship with DOP’s and Producers allows editors to step out into the light and give their input before the cameras roll. What kind of shots aid in the edit and what makes an edit sing?

Week 6: July 21
TEA AND CONVERSATION
7 award winning natural history professionals and experts at the top of their game share their valuable knowledge and insights. You will have the opportunity to submit questions throughout the course weeks and have them answered by the esteemed panel, broken up into two segments of 1 hour each.
What have you always wanted to know? Now is your time to ask it! 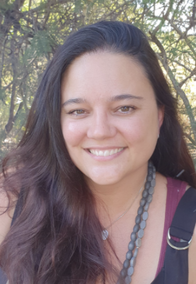 Candice Odgers (S.A.G.E) is an editor, sound editor and producer. But above all, a storyteller. She has 18 years of experience crafting natural history films with a deep passion for wildlife and the conservation of the planet's great wilderness’. This is what excites her. Getting outdoors as much as possible is imperative to keep her in balance. After receiving a Bachelor of Arts Degree in Motion Picture Medium (Film) from AFDA (South African School of Motion Picture Medium and Live Performance) majoring in Editing and sub majoring in Sound Design and Production Design, she we went on to specialise in the Natural History Documentary Genre where she has remained and enjoyed her career. Candice knew where her career path would lead from the tender age of six, always wanting to be an editor when she grew up. Candice spent time honing her craft at Briteside Television, Aquavision Productions and Earth Touch. Going on to work with acclaimed filmmakers Dereck and Beverly Joubert as Senior Editor and Head of Post Production for their company Wildlife Films for over a decade. Remaining part of their resource team for their productions, a relationship for well over 13 years. Candice enjoys all aspects of production from story inception through to post production and onto final delivery. Her keen grasp of the whole technical workflow as well as the creative process is beneficial to any project. Candice enjoys giving back to the industry she loves being firmly part of. She has presented on numerous panels and contributed to talks on editing as well as navigating the extensive deliverables given out by international broadcasters, presenting editing Masterclasses and writing articles for various publications on the craft of editing. In 2020 she took part in the world first VR NEWF congress (Facilitated by Habitat XR) - Giving a masterclass on editing but all in a virtual world "Shooting for the edit"; with fellow editors (Pippa Ulrich, Jolene van Antwerp and Susan Scott). She has also proudly been an Editing Mentor for the last few years for the NEWF Congress. Providing mentorship at the congress' underwater film labs. And more recently an Editing mentor for the Jackson Wild virtual mentorship program. She was granted the esteemed honour of being awarded the SAGE acronym. The use of the S.A.G.E. acronym indicates peer recognition of excellence in the field of editing. It is the highest honour that SAGE (The South African Guild of Editors) can bestow on an editor. Candice has been recognised both in South Africa as well as Internationally for various awards. Being nominated in 2020 in the Jackson Wild Best Editing category for the film Pumas - Legends of the Ice Mountains. She has been nominated three times and then receiving the coveted SAFTA award for Best Editing. She was part of the Editing team that won the prestigious Best Editing Award at the Jackson Hole wildlife film festival, as well as the IWFF award for Best Editing for the film The Last Lions. Many films she has worked on have gone on to achieve various awards including a nomination in the Outstanding Nature Programming Category at the 2016 Emmy Awards for the film Soul of the Elephant. Candice has served many times as a judge for the SAFTA (South African Film and Television Awards). Serving for many years as a judge for the prestigious Jackson Hole wildlife film festival (now known as Jackson Wild media awards) and serving as a judge for the Jackson Hole Living Oceans World Wildlife day showcase, Jackson World Wildlife Day Biodiversity showcase and Jackson World Wildlife Day Forests showcase. In 2020 serving as judge for the celebrated Wildscreen Festival on the editing panel. Judging with filmmakers from around the world and watching hundreds of films each year allows her to adapt her skill set tenfold. She has worked on many films and delivered them to the finest broadcasters, SVODs and distributors in the world. Editing, Sound, Grading and Storytelling are not just what Candice does as a career but rather they are a perfect amalgamation of a calling.