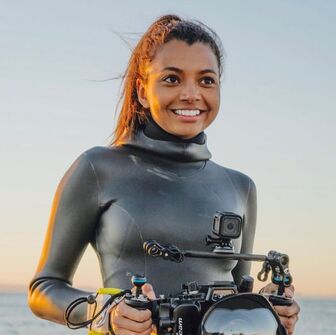 Inka Cresswell is a Wildlife filmmaker and underwater camera operator. After studying a B.Sc degree in Marine Biology she noticed a strong disconnect between science and general awareness and decided to combine her passion for underwater photography and interest in marine biology and conservation to create wildlife documentaries that focus on the underwater world and reconnect people with nature.

Through her photography and film work, she tells stories about research efforts, conservation successes and defeats and works to change peoples perspectives of some of our most misunderstood species. From attempting to portray the lesser viewed calm interactions with a cruising great white to documenting the intimate moment an apex predator comes face to face with the free divers working to conserve their species, with every image she attempts to tell a story, educating the public about these unique encounters and the individuals working behind the scenes to save them. Her underwater cinematography work has been featured on the BBC and her photographs have been used by dive brands and conservation organizations internationally. She recently completed her first short film which was a finalist at Jackson Wilds 'World Wildlife Day: Biodiversity film showcase' and is currently screening at a variety of film festivals around the world.

Inka also works as a social influencer in the diving industry giving public talks on ocean conservation, conservation filmmaking and marine topics to inspire more girls to become involved in the wildlife filmmaking and STEM industries.

With her camera and scientific journals as her weapon of choice, she fights to change the way we interact with the natural world and hopes that her work will not only educate and inspire a new generation of conservationists but arm them with the tools they need to educate others and drive real conservation impact.