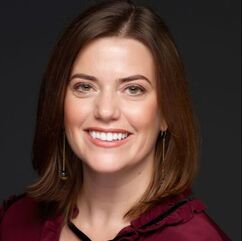 Chief Storytelling Officer, Senior Vice President
National Geographic Society
Kaitlin Yarnall is chief storytelling officer and senior vice president at the National Geographic Society. In this capacity, she is responsible for expanding the organization’s impact in all forms of storytelling including photography, journalism, film, and public experiences. Yarnall manages a creative team that produces impact-driven media and identifies key partnership, grantmaking, and fellowship opportunities with creative talent to further amplify the Society’s mission of a planet in balance. Additionally, Yarnall oversees content-based collaborations with National Geographic Partners across its global media platforms.

In her role as an executive editor at the magazine, Yarnall also served as the lead editorial manager for National Geographic’s groundbreaking Future of Food project. Launched in 2014, the multiyear project won numerous awards for its coverage of global food security. In addition to her editorial responsibilities, she negotiated and oversaw collaborations with multiple United Nations agencies around food security and agriculture. Yarnall was also deeply involved in conceptualizing the storytelling for National Geographic series on urban impacts and population.

Yarnall joined the National Geographic family in 2005 as a cartographer.

Yarnall frequently speaks on topics such as storytelling, data visualization, mapping, and visual narratives. She has been a keynote speaker at conferences around the globe, been a panelist at a United Nations roundtable, and addressed Scandinavian royals and rock concert audiences.

She has also written extensively about information graphics, data visualization, and cartography. Her book contributions include publications by Taschen, Gestalten, and other international publishing houses. Additionally, she often serves as a jury member for international journalism and design competitions.

Yarnall sits on the Board of Directors for Media Impact Funders.
​
She earned a B.A. in geography and Spanish literature at Humboldt State University and an M.A. in geography from The George Washington University.