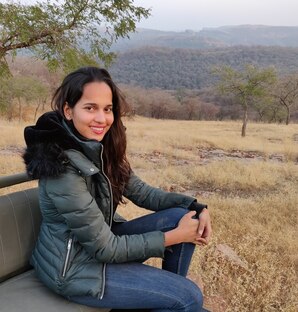 Nat Geo Explorer, TV presenter and wildlife filmmaker
Malaika is a National Geographic Explorer, wildlife presenter and filmmaker. As part of her Nat Geo Early Career grant, Malaika recently created a 3-part documentary series on the community-led conservation of Big Cats in India titled 'Living with Predators' which is scheduled to broadcast on Nat Geo Channel this August. She is passionate about investigating and documenting wildlife crime, and has been following the illicit trade pipeline in Manta Rays from India to China for the last 3 years, for her upcoming documentary. She was also the host for an 8-part series on lesser-known and endangered species like the Himalayan Black Bear, Purple Frog and King Cobra for Discovery Channel and Animal Planet in India. Beyond her work as a filmmaker, Malaika is also a competitive windsurfer, Dive Master and collaborates with the Wildlife Trust of India and WildAid on anti-trafficking investigations and projects. Over the past few months, she has been documenting the impact of the pandemic on migrant worker communities in India through National Geographic's COVID-19 Emergency Fund for Journalists.