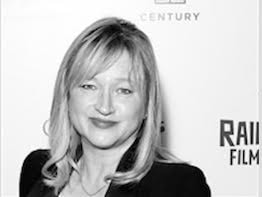 Melanie is an award-winning producer, setting up and running three creative companies in a 30-year career, starting at the BBC drama department through to leading teams across the entire production process from script to screen. As well as working on numerous international features, recently Melanie produced The Dark Mile, nominated for best 'UK Film' at Raindance and 'Best of Fest' at The Edinburgh International Film Festival.

In 2010 she co-founded Greenshoot, an award-winning sustainability consultancy, the first of its kind. Greenshoot has helped over 500 entertainment and content projects to reduce their environmental footprint, saving on carbon and costs. Melanie has written several international papers on sustainable development for the filming industries and represented the UK at international film festivals as an expert in the field of environmental sustainability and the arts.

Fingerprint Content is a new independent production company with hubs in America, India, the UK and France, with a commitment to empowering women and underrepresented voices and talent across cultures.
We work with both brand new talent and established brands to drive urgent conversations through popular and commercially driven projects, where currently they are underrepresented.