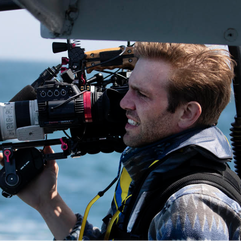 Director, Writer
Gripping Films
Tom Mustill is a wildlife and science filmmaker, writer and founder of micro-indie  Gripping Films, which has recently trail-blazed low carbon high impact film-making. His recent film #NatureNow has been viewed over 55 million times. He specialises in telling stories of where people and nature meet and working with environmental champions like David Attenborough, Greta Thunberg, Richard Dawkins, Stephen Fry and conservation and science heroes from across the world. His films have won over 30 international awards; The Bat Man of Mexico won a Panda for Best People of Nature, Giraffes: Africa’s Gentle Giants was nominated for an Emmy, and Inside Nature’s Giants which he directed the special episodes of won won BAFTA, RTS and Broadcast awards and the ZSL Award for communicating Zoology.

Tom started out directing the special episodes of the genre-busting BAFTA, RTS and Broadcast-award winning series Inside Nature’s Giants. His films have won over dozens of international awards and they include BBC Natural World programmes such as smash-hit Kangaroo Dundee, The Bat Man of Mexico and Giraffes: Africa’s Gentle Giants, which was nominated for an EMMY.  Tom recently also presented a one hour BBC/PBS Nature film The Whale Detective, about his personal search for the humpback whale which almost killed him, this aired in January 2020 and has already won awards.

Tom is passionate about impact, and making sure film is used to effect change. His films have been played to the EU Parliament and UN to encourage action on species conservation and protecting the atmosphere.Tom was recently made an Albert Ambassador (the BAFTA initiative for low carbon filmmaking).