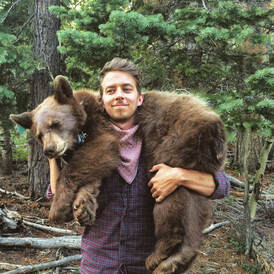 As a wildlife biologist I have been working with polar, black and grizzly bears for the past 8 years, and during that time finished a masters in wildlife conservation with an emphasis on both polar and black bear human conflict mitigation. The majority of my fieldwork has been conducted in the Alaskan Arctic as well as Southern Utah, but I have assisted on projects throughout the United States and as far as South Africa. My work has been featured by national media companies such as National Geographic, CNN and Al Jazeera, and I currently have one published scientific paper and another two that are in review and should be published by the end of the year. I have presented research findings in various wildlife meetings around the world, most recently at the International Bear Association meetings in Ljubljana Slovenia.
My passion for wildlife and wildlife conservation stems from an upbringing in Montana. Even as a child I understood the fact that a rapidly encroaching human population into the wild areas I loved would cause wildlife to be displaced or eradicated, and I developed a deep interest into how that conflict could be resolved, and that interest has led me to a life devoted to wildlife conservation.