Jackson Wild, in collaboration with HHMI Tangled Bank Studios and Day's Edge Productions, is proud to announce the distinguished Fellows of the  2019 Jackson Wild Media Lab, which will be held this fall, September 18-27, in the Grand Teton National Park. The selection committee was blown away by the quality and passion of applicants. Over 650 people applied from around the world, and only 17 were accepted into this rigorous filmmaking fellowship, which covers all expenses associated with registration, travel, food, and lodging during the workshop and the 2019 Jackson Wild Summit.
The Jackson Wild Media Lab is an immersive, cross-disciplinary science film making workshop that brings scientists and media creators together to learn from leaders in the profession and work together to develop effective tools to communicate about science, nature and conservation with diverse audiences across the world’s evolving media platforms. Learn more. 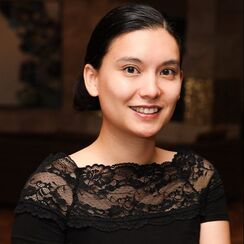 ​Regina Barber DeGraaff
Regina Barber DeGraaff teaches physics, astronomy and science communication at Western Washington University (WWU). Regina completed her PhD in physics from Washington State University with a focus in astrophysics. She also created the position of, and serves in the role as, the STEM Inclusion and Outreach Specialist at WWU. This half-time position is devoted to the retention and support of underrepresented students and faculty in STEM. Lastly, Regina co-created and manages Spark Science a multimedia (podcast, videos, and blogs) project that hopes to share science in an engaging, approachable and humorous way while challenging the scientist stereotype. 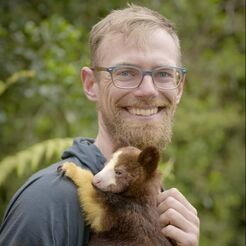 Jonathan Byers
Jonathan Byers is a scientist and visual storyteller with a diverse background in physical science
research, nonprofit management, commercial Unmanned Aircraft Systems (UAS) piloting, and outdoor education. His current work studying the behavior and habitat of the endangered Matschie’s tree-kangaroo in Papua New Guinea combines groundbreaking techniques using UAS aerial mapping and 3D animal movement data. Previously, as co-founder and director of the Alpine of the Americas Project, he worked to document changing glaciers and alpine ecosystems in the Sierra Nevada and Andes by crowd-sourcing repeat historic photographs.  He is passionate about communicating scientific and environmental stories with broad audiences through film and photography. 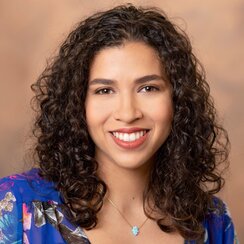 Stephanie Castillo
Stephanie Castillo is a fourth graduate student in chemistry at Vanderbilt University. Influenced by the many hours spent on YouTube, she was inspired to create an educational science channel called Phuture Doctors that showcases both the diversity of science careers and scientists. Her desire to create videos that breakdown complex research topics caused her to shift her career trajectory from an experimental chemist to a science communicator. Stephanie aims to use her research experience, identity, and passion for science communication to tell stories about science to inspire the next generation of scientists. 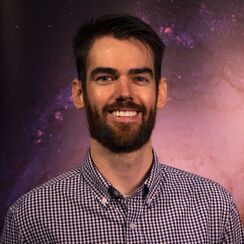 Tim Childers
Tim is a freelance science journalist from Charlottesville, VA. He began his career as a combat correspondent in the United States Marine Corps, telling the stories of the men and women who serve their country. He earned a degree in Physics at the University of Colorado Boulder where he researched galaxies and worked at the school's planetarium. Tim is passionate about science and conservation and wishes to expand his skill set to become a multimedia producer. 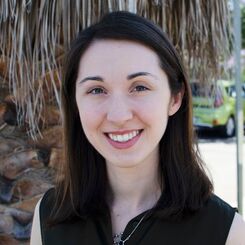 Alex Dainis
Alex graduated from Brandeis University with a double major in Biology and Film, Television, and Interactive Media before becoming an associate producer at the Richard Lewis Media Group. Driven by her love of science communication, she started a science education YouTube channel, Bite Sci-zed, which has gained over 30K subscribers across the world. She recently completed her PhD in Genetics at Stanford University and has moved into a full-time science-communication career as a science video producer. In her free time Alex enjoys hiking, hanging out at aquariums, and liking the many dogs of Instagram. 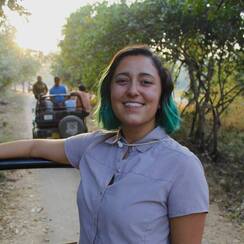 Sarika Khanwilkar
Sarika Khanwilkar is a U.S. Fulbright student to India, PhD student at Columbia University, and founder of Wild Tiger. As a researcher, she utilizes remote sensing technologies to monitor biodiversity and examines socioeconomic dimensions of conservation in India. She aims to use her research along with science communication and education to galvanize global resources to save tigers and provide people, particularly indigenous communities, a fair living in places where people and tigers coexist. In addition to advancing tiger conservation, she aims to inspire youth, and particularly women, around the world to pursue conservation science as a career. 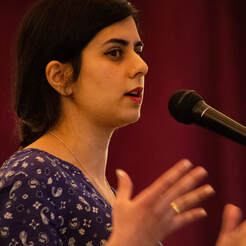 Reyhaneh Maktoufi
Reyhaneh Maktoufi is a Ph.D. candidate in Media, Technology, and Society at Northwestern University. Her main fields of interest are science communication, curiosity, and public engagement with scientists. She is a visiting researcher at the Adler Planetarium, where she studies science communication and facilitates workshops on communication skills and she's also a producer at The Story Collider podcast.
Before starting a Ph.D., Rey has been working as a health communication facilitator and cancer preventive/palliative care campaign manager in Tehran, Iran. Rey currently enjoys working with different nonprofits such as the Communicating Science Conference (ComSciCon). She also engages in science outreach through writing blog-posts and making science comics. 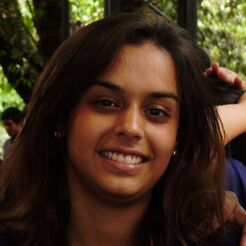 Taira Malaney
Taira is a director and editor based in Goa, India. She received her BA in Psychology in 2013 at Occidental College in Los Angeles, after which she moved to Andaman and Nicobar islands to teach a marine conservation course in the village of Chidiyatapu. There, she hosted regular film screenings about the marine world. The students' positive responses to this teaching method gave Taira insight into the power of film. After completing a documentary film course at the San Francisco School of Digital Filmmaking in 2016, Taira founded Emaho Films. Today, she is driven by the idea that storytelling can be used as a tool to educate and inspire change. 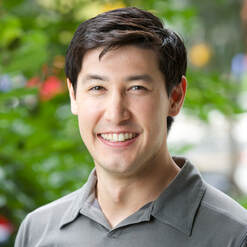 Kevin McLean
Kevin McLean studies wildlife ecology in tropical forest canopies. Alongside his research, Kevin has been involved in science communication and media, including writing, public speaking, research for film and television programs, and producing stories for public radio. As a 2016-17 Fulbright-National Geographic Digital Storytelling Fellow he wrote about the process of conducting field research while surveying canopy wildlife in Malaysian Borneo and the Ecuadorian Amazon. Kevin has an undergraduate and Master's degree from Stanford and a Ph.D. in from the Yale School of Forestry and Environmental Studies. He is currently a postdoctoral researcher at UC Davis. 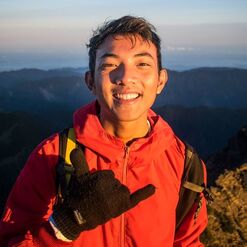 ​Gab Mejia
Gab Mejia is a National Geographic Explorer, conservationist, mountaineer, and emerging storyteller. He has traveled and covered stories on nature from the receding glaciers of Patagonia for the Ramsar Convention on Wetlands, to the critically-endangered dwarf buffalos for the World Wide Fund for Nature (WWF). He is an avid adventurer and mountaineer, having scaled mountains across different continents from Northern Africa all the way to the Himalayas and South America. He works as part of the National Youth Council of the WWF-Philippines to educate and empower the youth to protect and conserve wetlands and mountain ecosystems through the art of visual storytelling. He is a Nikon Ambassador for the Philippines and is an aspiring Environmental Engineer and Conservation Photographer integrating his passion for the arts and science. 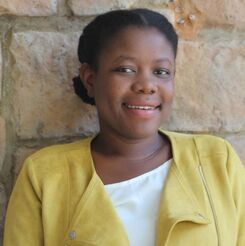 Luwi Nguluka
Passionate about inclusivity and diversity in the conservation landscape, Luwi Nguluka attributes her passion for wildlife to her childhood in the African Wilderness, including the Okavango Delta. Representing the next generation of conservationists in Zambia, she leads several innovative awareness campaigns including "Women For Conservation", Zambia's first network for women who work in and are interested in conservation initiatives across the country, which she co-founded, and through her work with Wildlife Crime Prevention: Zambia's first Conservation Careers Fair and the “This is not Game” bushmeat campaign launched to tackle the illegal bushmeat trade — a devastating threat to carnivore and prey species across the continent. Luwi currently manages several conservation awareness projects and this capacity has produced two short films namely, the “This Is Not A Game” public service announcement depicting the movement of bushmeat from poacher to plate and an animated film juxtaposing the illegal bushmeat trade and the legal game industry in Zambia. Luwi is committed to continuing to use her passion for technology and storytelling to alter the face of conservation communication in order to create a more diverse conservation climate. 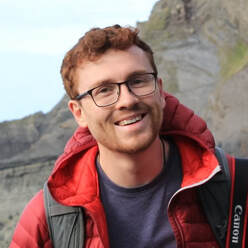 Jack Richardson
​Growing up just outside Cambridge, UK, Jack spent much of his childhood outdoors exploring his local countryside. He has a Masters in Geology and is a PhD researcher at the University of Birmingham, finishing at the end of 2019. Throughout his studies Jack has created award-winning films, been invited to talk about his science communication exploits and worked on BBC Springwatch. He has filled the Lapworth Museum of Geology with dancers, poet laureates and drones. Whilst researching on a remote Scottish island Jack discovered the smell of fulmar vomit and ringed his first bird, a Great Skua chick.­­ 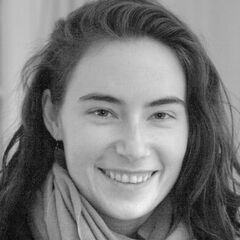 Peri Sasnett​
Peri is a multimedia science communicator for the National Park Service where she makes science accessible to wider audiences through film, writing and personal connection. After earning a Masters in geology in 2013 studying earthquakes in New Zealand on a Fulbright Fellowship, Peri worked for the last six years in the public lands and conservation realm. She engages her audiences intellectually and emotionally, engendering a respect for science and a sense of stewardship for the natural world. 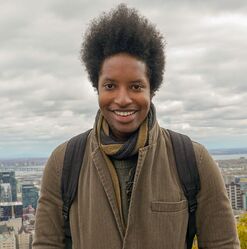 Wyatt Toure
Wyatt Toure is a graduate student at McGill University where he researches animal behaviour and evolutionary biology. As a kid, Wyatt didn’t have many opportunities to engage with nature, but consuming written and visual media on biology gave him a powerful sense of wonder and curiosity about the natural world. Through media he’d like to bring nature-deprived viewers the same amazement he had reading a natural history book in his childhood room — to impart that sense of wonder that led him to develop a fondness for nature, the environment, and the diverse organisms we share Earth with. 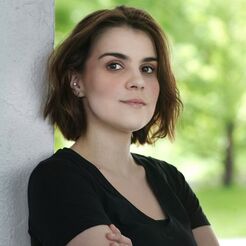 Alana Wilcox
Alana Wilcox is a PhD candidate at the University of Guelph. She has a passion for conservation biology and is currently studying the effect of a neonicotinoid pesticide on monarch butterflies. As a science communicator and writer she aims to promote environmental stewardship and bridge the gap between the sciences and arts. Alana is the developer of Frame/Shift, a hands-on workshop that explores ecological sciences through photography and storytelling. Ultimately, Alana’s goal is to include culturally appropriate methods that use creative media-based techniques to explore how cultural values can be incorporated into conservation management. 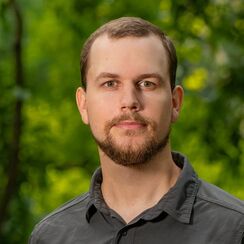 Alex Wiles
Alex Wiles is a conservation photographer and filmmaker based out of Omaha, Nebraska. His focus on conservation takes him around the world, where he documents the challenges faced by wildlife and elevates the voices of underrepresented people at the forefront of these issues. He is an Emerging League Photographer with the International League of Conservation Photographers and has been published in a variety of internationally distributed media outlets.