2022 Special Jury
Jackson Wild is committed to elevating impactful storytelling at the forefront of nature, science and conservation. We are a global community motivated by deep reverence and urgent concern for the natural world, with a shared belief that through collaboration, and deep commitment we can address the critical challenges we are facing collectively as a result of climate change.

New in 2021, Jackson Wild's Special Jury Recognition welcomed nominations for both people and film projects pushing the boundaries of storytelling to create authentic engagement about the wild that achieve global impact.

in Media & Conservation
Jackson Wild’s Legacy Award in Media recognizes visionaries who have demonstrated excellence and innovation in delivering world class content, and who have demonstrated excellence in science & conservation. Their work places them in the field, embedded in nature and the environment, working closely with species, and often at great risk. The work can be recent or demonstrate a depth of years dedicated to conservation.
Valerie Taylor 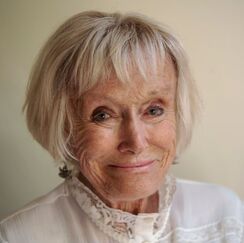 A pioneering diver and underwater photographer/filmmaker, shark expert Valerie Taylor is also an artist and children’s book author and ardent ocean conservationist. Her campaigning efforts helped to prevent oil exploration in Ningaloo Marine Park, overturned mining rights on Coral Sea Islands, and won hard fought protection for many significant marine species and their habitats on the Great Barrier Reef and beyond.

For 60 years, Valerie Taylor has dedicated her life to raising awareness about our oceans and the importance of protecting habitat for marine species. She started life in the ocean, as a free diver, spearfishing to provide food for her family in the 1950's, but she came to understand that the killing of the fish for sport was senseless and unsustainable. She and her husband Ron took up their cameras and started filming the wonders of the oceans, with a special focus on sharks. Their first film, Shark Hunters was released in 1963. Valerie used her fearless charm and determination to lobby politicians and was instrumental in the establishment of marine sanctuaries and species protection legislation. Using their footage as a tool in her lobbying she succeeded in having the grey nurse shark protected ,the first shark to be protected in the world. Valerie's presence on television screens around the world diving cageless with sharks like the Ocean White Tips in the 1960's inspired generations of people to see sharks differently and to join her in lobbying for their protection.

Jackson Wild’s Rising Star Award recognizes an early-career leader in nature, conservation and science media. This award reflects ongoing and exceptional contribution to our planet while demonstrating leadership and innovation that promises extended impact in the future.
Kara Norton

In recognition of their tireless efforts to create a culture of equity for nature, environment and wildlife-visual-storytellers in Africa. Across the continent, their work has helped remove barriers while building inclusive capacity in the conservation media industry.
Pragna Parsotam-Kok and Noel Kok
Sponsored by: HHMI Tangled Bank Studios
Jackson Wild recognizes an active impact campaign that extends conservation beyond the screen to inspire measurable on-the-ground change through education, policy change and engagement and outreach.
Grand Prismatic
Sponsored by: Doclights​
This recognition honors a filmmaker from a self-identified underrepresented community in relation to gender identity, ability, people of color, Indigenous/Native and LGBTQIA+, telling stories about wildlife, conservation and science.
Click here to learn more!
Global Voices
Sponsored by: African Wildlife Foundation
Jackson Wild honors regional wildlife, conservation and science stories presented from a local perspective. We encourage submission of films by local filmmakers working in the Caribbean, Latin America, Asia, Africa, The Middle East, Oceania and Indigenous Communities around the world.
Santiago Wild Finalists
​Sponsored by: Smithsonian Channel
Jackson Wild is proud to co-sponsor Santiago Wild, the 1st film festival dedicated  to wildlife and the environment in Chile. Organized by Ladera Sur!
● Long - Form
● Short - Form ​
Engaging New Media
This recognition honors content that best integrate the interactive potential of digital media and technology that engage awareness and understanding of the natural world, including but not limited to apps, games, social media content, extended reality, mobile and web-based experiences.