The 2011 Festival competition included 510 films from more than 30 countries entering 800 categories—a record number of submissions competing for 22 special category awards. Nearly 100 judges from North America, Europe, Asia and Africa participated in the preliminary selections. The 2011 award winners were selected by a distinguished panel in Jackson Hole preceding the five-day industry conference held in Grand Teton Park at the Jackson Lake Lodge, and announced at the Festival Awards Gala on Thursday, October 6th. 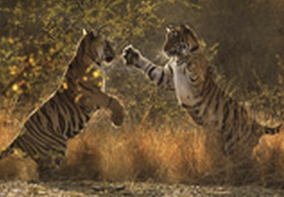 Sponsored by the Nature Conservancy

Sponsored by the Discovery Channel

Sponsored by Off the Fence Productions

Dr. Alan Rabinowitz—Conservation (sponsored by NHU Africa)
One of the world’s leading big cat experts, Dr. Alan Rabinowitz is currently the CEO of Panthera, a nonprofit organization devoted to saving the world’s wild cat species. Prior to co-founding Panthera with the organization’s Chairman, Dr. Thomas S. Kaplan, Rabinowitz served as the Executive Director of the Science and Exploration Division for the Wildlife Conservation Society for almost 30 years.

Dr. Rabinowitz has traveled the world on behalf of wildlife conservation. His work in Belize resulted in the world's first jaguar sanctuary; his work in Taiwan resulted in the establishment of this country's largest protected area and last piece of intact lowland forest; his work in Thailand generated the first field research on Indochinese tigers, Asiatic leopards, and leopard cats, in what was to become the region's first World Heritage Site; and his work in Myanmar has led to the creation of five new protected areas, including the country's first marine national park, first and largest Himalayan national park, and the world’s largest tiger reserve in the Hukaung Valley.

Dr. Rabinowitz has dedicated his life to surveying the world’s last wild places, with the goal of preserving wild habitats and securing homes, on a large scale, for some of the world’s most endangered mammals. His focus on cats is based on conserving top predators, which affect entire ecosystems. By saving cats, the impacts are far-reaching and conserve vast landscapes upon which many species depend, including humans. One of Dr. Rabinowitz's greatest achievements was the conceptualization and implementation of the Jaguar Corridor,  a series of biological and genetic corridors for jaguars across their entire range from Mexico to Argentina. Dr. Rabinowitz also initiated Panthera's Tiger Corridor Initiative, an effort to identify and protect the world's last remaining large interconnected tiger landscapes, with a primary focus on the remote and rugged Indo-Himalayan region of Asia.

Clark Bunting—Media (sponsored by Montana State University Science & Natural History Filmmaking Program)
For more than 25 years, Clark Bunting has been asking a lot of good questions…and turning the search for those answers into award-winning, unforgettable and standard-setting television. As one of the Discovery Founder John Hendricks’ first hires, Bunting has played a pivotal role in almost every facet of program development and production, breathing life into the Discovery brand with a signature mix of industry expertise and a genuine wonder and embrace of the world.

As president and general manager of Discovery Channel and president of Science Channel, Bunting oversees the flagship network now reaching close to over 100 million subscribers in the U.S. Bunting continues to innovate the natural history genre with leadership and investment in new technologies. In his previous post as executive vice president and general manager for Discovery Channel, Bunting oversaw a number of trendsetting new series, including Mythbusters and Werner Herzog's Academy Award® nominated documentary Encounters at the End of the World.

In addition to all aspects of network programming, Bunting is closely involved with the network’s environmental advocacy and stewardship. As part of the original team that launched SHARK WEEK, Bunting has long recognized the imperative for the network to be part of real issues outside of this pop culture phenomenon. In 2010, Bunting, in partnership with The Ocean Conservancy, worked closely with Senator John Kerry (D-MA) to introduce legislation to further the crusade for shark conservation awareness. Bunting also serves on the board of the American Humane Society.